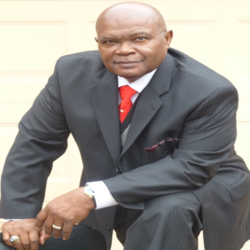 Frank McGhee, Jr. received Christ as Savior age 13. He began teaching the bible at age 15. He is married to Patricia A. McGhee and on July 15, 2017, they celebrate 45 years of marriage. He is the father of two adult children and a grandfather of an adult grandson and a 12-year-old granddaughter. He is a graduate of Southern University Agricultural and Mechanical College, Baton Rouge, La. with a B.S. degree in Industrial Technology – (Electronics Engineering Technology).

He is an Honorably Discharged Veteran and recipient of The Purple Heart, received in the Vietnam War. He is a former General Motors Corporation Sr. Sales Representative.

He is a licensed and ordained minister. After his call into full-time ministry, he left General Motors Corporation and felt called to attend Dallas Theological Seminary (DTS). He graduated from DTS with a Master’s Degree in Theology (Th.M.) and majored in Bible Exposition. He was a senior class preaching finalist for the Dr. H.A. Ironside Award for Expository Preaching. While in Seminary, he taught various courses in all departments at Southern Bible Institute. Pastor McGhee also taught at Rutledge Business School, Dallas, Texas.

Through The Urban Alternative, He completed his counseling internship and became a staff member in counseling at Oak Cliff Bible Fellowship (Dr. Tony Evans – Sr. Pastor) in Dallas, Texas.

He moved to Houston, TX with his wife Pat in 1995 to serve as the assistant to the pastor of Good Hope Missionary Baptist Church.

He has given leadership to “The Prison Ministries” at Oak-Cliff Bible Fellowship, Dallas, TX and Good Hope MBC, Houston, TX

He is also a former pastor and now serves as Servant Leader of the Marriage and Counseling Ministries, Emotional Wellness and Mental Health Ministries, along with various teaching assignments, under the leadership of Walter August, Jr. (Sr. Pastor, The Church at Bethel’s Family, Houston, TX).

He has been a bible teacher for over 58 years and enjoys the Word of God more and more as each day passes.

His passions are: leading individuals to Christ, helping Christians learn how to study the Bible, Teaching God’s Word, helping Christians learn their spiritual gifts and their personalities and learn how they work together in their lives. Pastor McGhee believes “Spiritual Gifts” are the keys to unleashing the power of the individual’s life in the body of Christ. This power is first realized in one’s own life and then explodes in the body as God’s gifted people ministers to each other. Once armed with this discovery, no believer is ever the same. He and his wife have been counseling individuals and couples over 30 years.

FINALLY: Pastor McGhee has a question; “Why do you do what you do when you do it?