The Urban Ministry Institute of Houston

TUMI of Houston enables churches, denominations, and organizations to equip leaders to:

In inner city Houston, there is poverty, drug abuse, and crime. It is the bedrock of the endless stretches of potholes in the asphalt and concrete that connects the chains of houses to apartments and cantinas to a clubs. In these neighborhoods there are many needs, people crying out for help and answers. These inner city neighborhoods are typically the longest and widest pipelines to Texas prisons and jails. Many suburban churches and the Christians that grace them only on Sundays are far, far removed from the realities of urban life in the old Houston Wards. So what can be done to help? Who can help? Who cares and who is equipped?

The individuals that can actually step into these urban communities and be catalysts for permanent change are not usually found living in master-planned neighborhoods but are found locked up behind bars and razor wire. They are inside Texas prisons and Jails.

I then saw Jesus standing in front of seemingly thousands of prisons and jails. The Lord said, “These have almost been destroyed by the enemy, but these ones have the greatest potential to be used and to bring forth glory to my name. Tell My people, I am going this hour to the prisons to activate the gifts and callings that lie dormant in these lives that were given before the foundation of the earth. Out from these walls will come forth an Army of spiritual giants. They will have power to literally kick down the gates of Hell and overcome satanic powers that are holding many of My own people bound in My own house.  – Bill Yount

to learn more about TUMI Houston 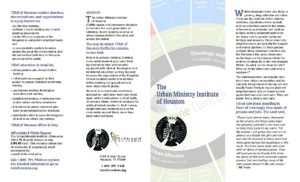